Fact – Energy efficiency helped save £290 a year on bills

You are here:
Uncategorised 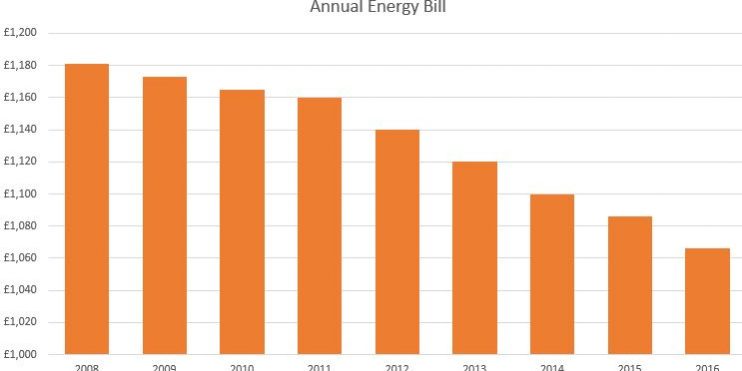 Improved energy efficiency in the UK has helped offset low carbon policy costs on energy bills and reduced emissions according to the Committee on Climate Change (CCC), which found householders paid £115 less per year for their energy last year than in 2008 when the Climate Change Act was passed.

While low carbon policies added around £9 a month to an average household energy bill in 2016, it was offset by a reduction of more than £20 per month as a result of energy efficient measures, including upgrading fridges, freezers and boilers – and saving around £290 per year since 2008 as gas and electricity use has fallen by 23% and 17% respectively.

The CCC’s report states the gradual shift towards low carbon electricity could add between £85 to £120 per year to a typical bill by 2030 if further policies to meet UK climate goals are put in place, however it suggests further improvements in energy efficiency have the potential to deliver savings worth £150 or more if wholesale costs continue to rise.

The Office of Budget Responsibility’s recent forecast the cost of environmental levies on energy bills to rise to £12.6 billion by 2020.

According to the CCC, the costs associated with low carbon policies for businesses are expected to rise to around 0.5% of the operating costs for the commercial sector, 1% for manufacturing and 1.6% for energy intensive sectors by 2030. The Committee’s scenarios to meet the fifth carbon budget involves measures to reduce business electricity use by around 15% – this, it says, would cut overall costs for firms.

While some energy intensive manufacturing sectors face higher costs as a result of climate policies, those deemed most at risk are compensated for those costs.

The Committee recommends compensation for firms at risk of ‘carbon leakage’ should be predictable and reliable. It adds there is a range of opportunities for business from the transition to a low carbon economy – it already makes up b2% to 3% of GDP and employs hundreds of thousands of people.

CCC Chairman Lord Deben said: “Action to deliver a cleaner, more efficient energy system is already delivering benefits for households and businesses. UK emissions are falling – down 38% from 1990 to 2015 – while GDP has risen by almost 65% in the same period. Meanwhile the typical household energy bill has fallen in real terms since 2012. “The UK’s progress to reduce emissions and its comparative advantage in important areas such as the automotive sector, offer opportunities for future growth and employment while delivering vital action to tackle climate change.”

How much electricity comes from renewables?
14th March 2017